Felix first appeared on the 1919 animation short, which I don't recommend watching, Feline Follies. The
topic of it's authorship, and who would be Felix's creator by extention, is a still disputed to this day.
Because of that, many fun facts about him associated to his creations are just not oficial. For example,
the name Felix, if we go by Otto Messmer's version of the story, was sugested by John King because of the
felicity associated with black cats [1]. But was actually a homage to Australia Felix in Pat Sullivan's
version. Still going by Sullivan, the character itself was inpired by both The Cat That Walked Himself and
his wife's love for stray cats [2]. But Messmer said Felix was based on an animation of Charlie Chaplin
he did himself [1]. Being Sullivan or Messmer the first to draw Felix, only after Bill Nolan's redesigning
in 1924 that Felix The Cat began to really look like the Felix we know today. 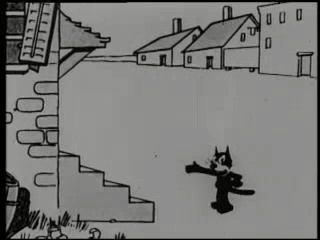 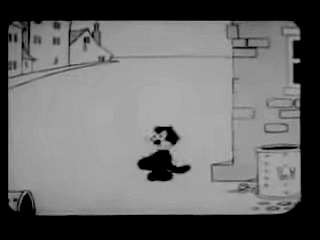 Around 1953 Joe Oriolo did the secong redesign to Felix after taking over the Felix The Cat comic strips.
This new Felix was the one to appear in the 1950's and 1960's tv series and the first one to get his Magic Bag Of Tricks. 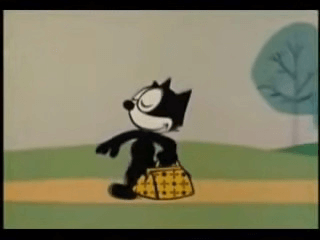 On the topic of TVs, Felix was actually the first image to be broadcasted on one, in 1928![3] 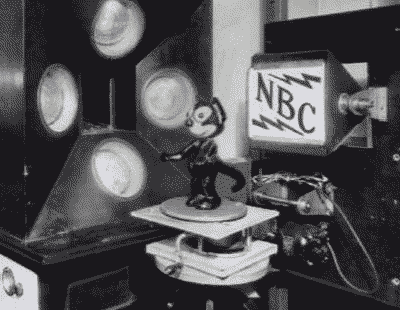 I got a little obsessed about the doll used in the background. Here is all the information I learned
through my research: This was, most probably, this 13" composition doll from 1924 that had a detachable
wired plush tail, arms with movable shoulders and could have come with a neck ribbon or skirt in some
versions. These dolls had a label on the bottom of their foot that said "Copyright 19-'22-24 by Pat
Sullivan". Some of the dolls have the word Felix painted on their chest. The company Sideshow made a
"Renewal Version" of this doll in vinyl in comemoration of Felix's 100th anniversary